Fishing in the Pays de Grasse

The Alpes-Maritimes is a land brimming with grandiose, unspoiled landscapes; abundant, good-quality water; and healthy, diverse fish species, making it unquestionably a paradise for all fishing fans.
You will find all the useful information (in French) on fishing areas, contacts, equipment and advice on the website of the local fishing federation (Fédération de Pêche des Alpes-Maritimes) for fishing and protecting the aquatic environment (www.peche06.fr)

🐞We love our land and its many treasures. We share it with you when you visit.
Please join with us in loving the land and respecting it with eco-friendly actions.  🐞

The Siagne is the department’s westernmost coastal river. It partially marks the boundary between the Var department and the Alpes-Maritimes department.
The karstic Vauclusian spring that are the headwaters of the Siagne is in town of Saint-Vallier-de-Thiey, and the river runs some 27 miles (44 km) down into the Mediterranean Sea at Mandelieu-la-Napoule.

The Siagne is classified as Category 1 from its headwaters to the Tanneron bridge. This river’s journey alternates between riffles and deep (sometimes very deep) pools along nearly its entire length, making it an exceptional place for fishing large trout – the hard water, rich in macroinvertebrates, promotes rapid trout growth.
At the Pont de Siagne (the bridge on the road connecting Saint-Cézaire-sur-Siagne and Mons), the Siagne River is less hemmed in by steep hills and therefore much easier to reach, and it is in this sector that an interdepartmental “discovery fishing trail” has been established. This area is ideal for trying one’s hand at fishing on the Siagne for the first time, or learning a new technique.

A river to visit, as the surrounding landscapes alone are worth the trip! 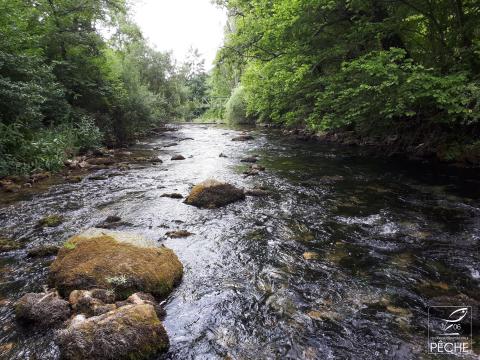 This river, just over 30 miles (49 km) long, with nearly 22 of those miles (35 km) in first piscicultural category, is simply magnificent. Flowing from karstic headwaters that begin at an altitude of 4,068 feet (1,240 m) at the foot of L’Audibergue mountain, it ends its run in the Mediterranean Sea at Villeneuve-Loubet.

On the upper part of the stream, brown fario trout live in a mountain setting where, when fishing season opens, it is not uncommon to see snow.

Every fishing technique can be practiced here: When the season starts, the pêche au toc (natural-bait fishing) is the most-used technique, because it allows for slow and meticulous prospecting of each spot. As soon as the water temperature increases a bit and the flow is still strong, it’s time to seek out the best casting stations – you may have some pleasant surprises. Finally, when the water level drops, fly fishing is the most effective choice, especially early in the morning and at dusk.

For those who enjoy more vigorous approaches, the Loup forms gorges upstream from Pont-du-Loup, where large pools and waterfalls alternate in succession. This sector, a swimming and canyoning paradise, can be very productive at the start of the season, or very early in the morning during the summer period.

Its waters are often clear, quite chilly, and well oxygenated upstream. Along its path, the Estéron has carved spectacular cluses, or narrow gorges, the “Clues” of Saint-Auban, Les Mujouls, Aiglun, and La Cerise, while some of the tributaries have also formed famous gorges, like the Clues du Riolans or those of the Saint Pierre valleys.

From a piscicultural standpoint, the brown fario trout is the Estéron’s indicator species with a well-defined endemic strain. It shares the waters with many other species, such as southern barbel, western vairone, minnow, chub, European eel, and white-clawed crayfish.

As for fishing techniques, anything goes on the Estéron – all techniques are likely to be practiced along this marvelous river and its succession of wide deep flats and riffles on its flattest parts, interspersed with large pools and waterfalls in the gorge/cluse sectors.

Thorenc Lake (Lac de Thorenc), at 3,674 feet (1120 m) in altitude in the foothills of the Alps and less than an hour from Grasse, is a 2.5-acre (1-hectare) artificial lake formed by a dam on the stream known as La Lane. This site has been improved with certain facilities to better accommodate families in a lovely verdant setting.
As it is easily reached from the nearby parking lot, with an easy path that runs all the way around the lake, the young and the young at heart can all enjoy a magical day of fishing!
Interesting and informative signage produced by the federation are posted all around the lake to illustrate various fishing techniques and show the wildlife found in and around the lake and the La Lane stream.
The species present are: brown fario trout, rainbow trout, and brook trout, as well as chub, minnow, and tench.
During certain times of the fishing season, the federation stocks the lake with rainbow trout. It is open to all fishing techniques starting on the second Saturday in March until the second Sunday in October. 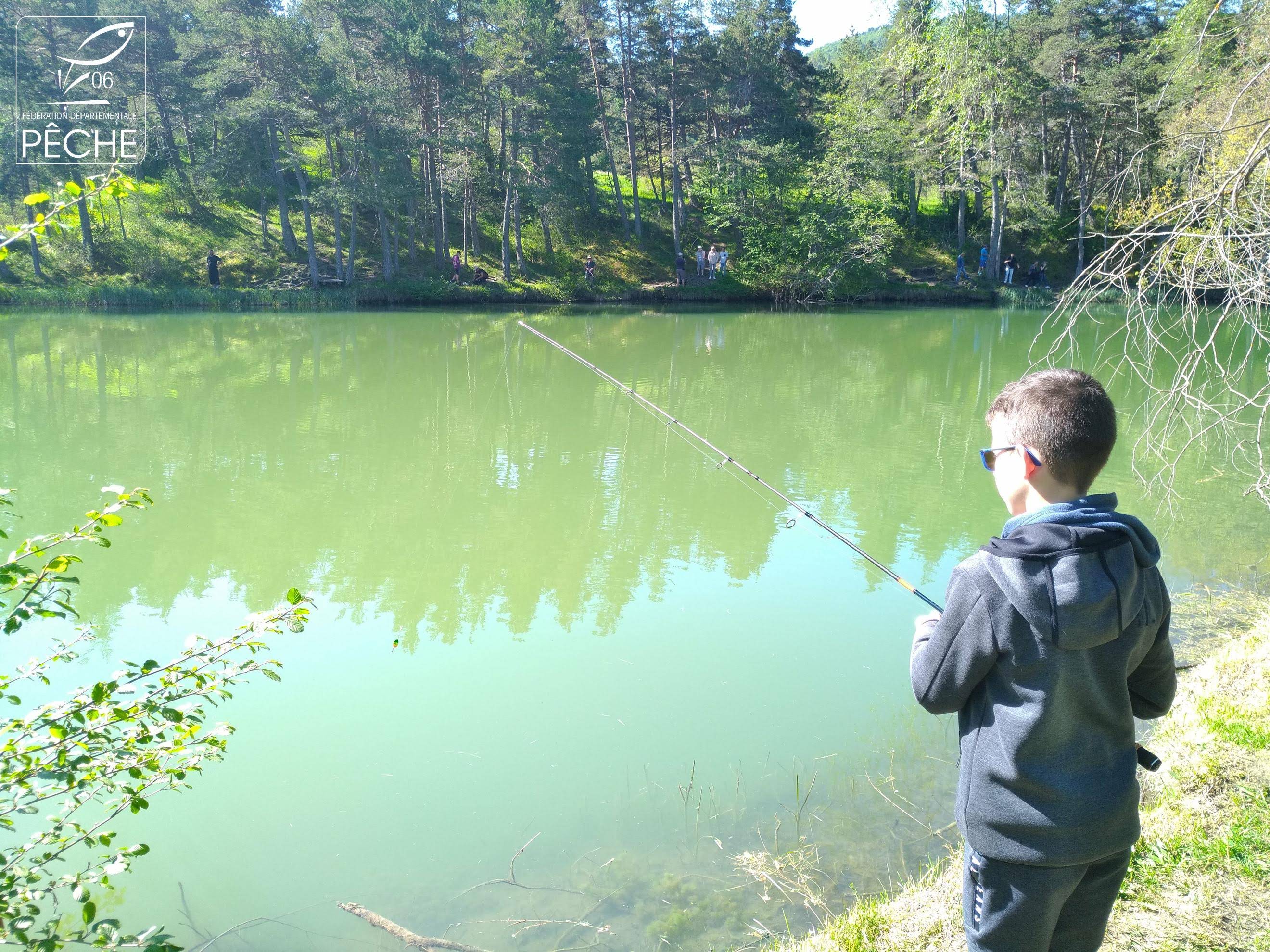 There are two fishing ponds at your disposal in our park: in the smaller lake are small trout, which weigh an average of just over half a pound (300 grams); in the large lake, their weight averages 2.2 pounds (1 kilogram). Among the rainbow trout, you may get lucky and catch a wild fario brown trout.

The lakes are constantly fed by the park’s spring, for clean, fresh water that is perfect for our fish! 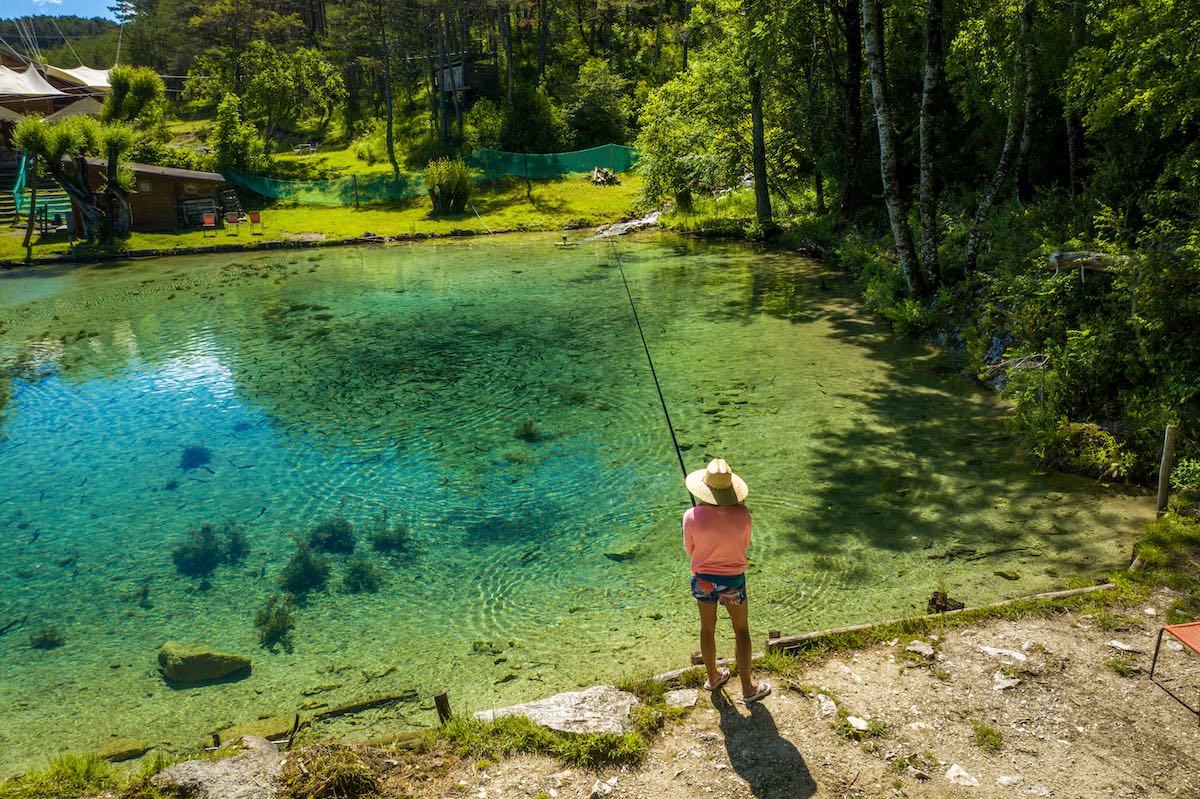