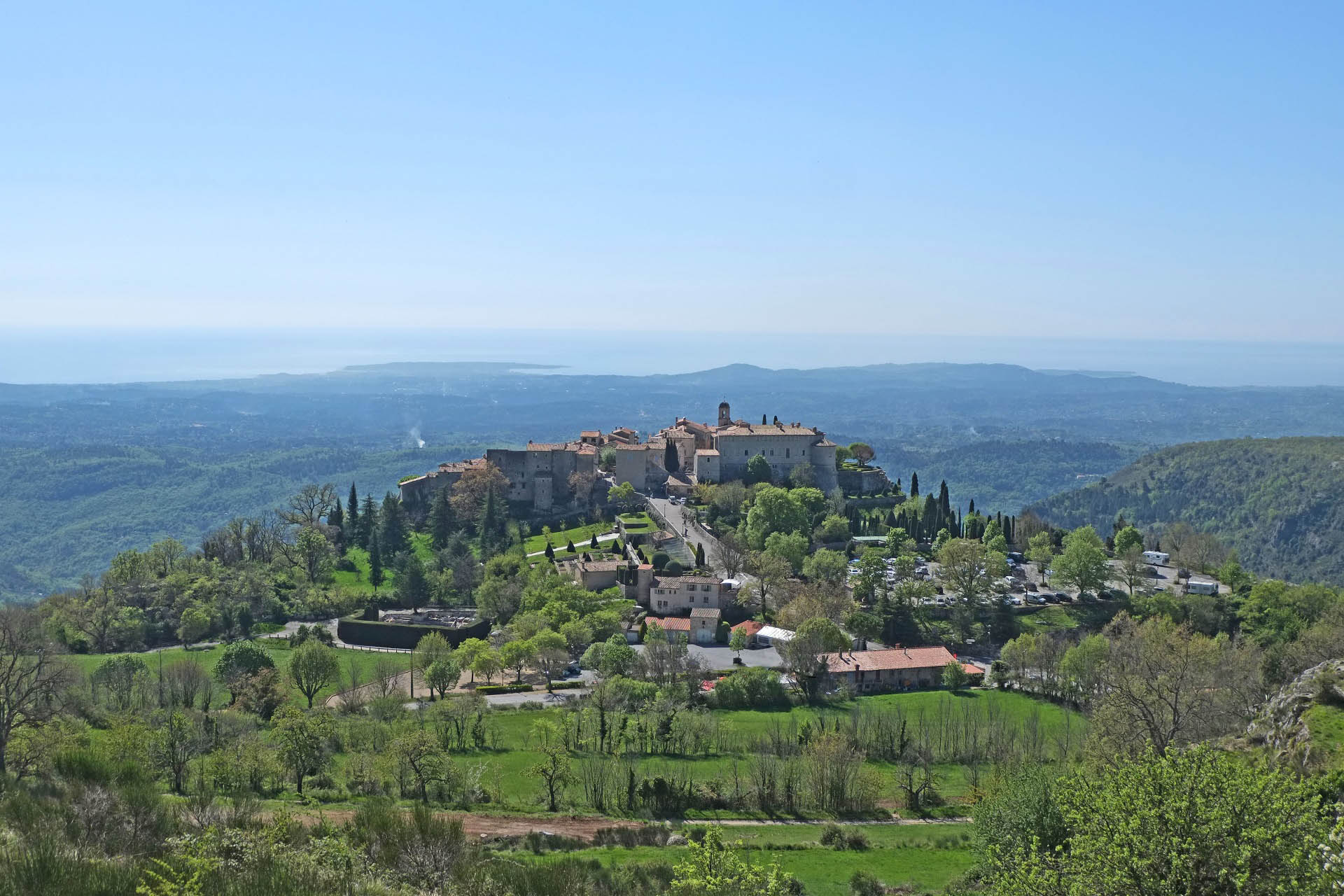 One of the Most Beautiful Villages in France
Gourdon is of ancient origin and the word Gourdon means “Mountain”. Because of its strategic geographical situation, the village often had to serve as a strong-hold. Built on an isolated rock, it was a shelter, a defensive place. Numerous traces bear witness to this : Oppidums,Roman roads and fortifications. Despite the Saracens invasions and the bloodshed resulting from the wars in the South of France, Gourdon has stood the test of time and remains one of the most appreciated visiting places in the region.

- On a rocky peak at 760 meters altitude, it overlooks the Vallée du Loup.
ts incomparable panorama extends over 80 kilometres of the Côte d’Azur, from Nice to Théoule. Only ten kilometres as the crow flies from the Mediterranean, Gourdon is a wonderful place for a stroll, an absolute must. Year after year, those who visit the place come back… You’ll enjoy its lively lanes, Provencal houses and you’ll discover its numerous craftsmen.

- About 400 inhabitants with the Hamlet of Pont du Loup
At the end of the XIX th century, Gourdon extended to include the hamlet of Pont du Loup, at 230 meters altitude, in the Vallée du Loup where the climate was easier for cultivation.The Bridge at Pont du Loup
A wonderful bridge which looked down on the hamlet, was built in 1890 for the Chemins de fer de Provence (train des Pignes). It was destroyed in 1944 . There remain only the fantastic pillars we can see today.

- The Romanesque Chapel of Saint Pons : The Chapel dates from the twelfth century. It is built on the current upper parking, on an area which was once a field where horses were used to trample (thresh) the wheat. You’ll enjoy a medieval garden, which has been created recently and which gives a perfect idea of the gardens of yesteryear, with its many varieties of Mediterranean plants.

- The Church Saint Vincent : Built in the twelfth century, it’s a Romanesque Church. St Vincent is the patron saint of Gourdon. Note in this listed site : its very ancient Holly water and pavement of old stones...

- The Feudal Castle IX,XII, XVII th centuries : The Castle, built on the western side of the village, looks down over Gourdon. Of imposing dimensions, it defended its territory and watched over the whole valley. It was built on the bases of an ancient fortress dating from the ninth century. Today you see a castle of typical Provencal style with its square courtyard, three towers and a keep. Louis de Lombard, Seigneur of Gourdon, ordered the construction of the present edifice.The Castle is listed as an Historical Monument.

- In the old days...
The only way of getting between Pont-du-Loup and Gourdon was via the « Chemin du Paradis ». (the Road to Heaven). It is a wonderful footpath with an unique view and … 500 meters to go up! Now we walk it for pleasure!

- Le Saut du Loup : A listed place to visit, on the Gorges du Loup road,(open from june to september…)